Spiral: From the Book of Saw
Added to Wanted list 2 weeks ago

The Standoff at Sparrow Creek

2 weeks, 5 days ago
The Cinephile rated The Lighthouse

The Lighthouse 6/10
2 weeks, 5 days ago
The Cinephile added 4 items to their collection

2 weeks, 6 days ago
The Cinephile added 4 items to The Cinephile's Film Journal: 2020 list

2 weeks, 6 days ago
The Cinephile added 1 item to The Cinephile's Film Journal: 2020 list

Trespassers 6/10
3 weeks, 4 days ago
The Cinephile posted a list

3 weeks, 5 days ago
The Cinephile added 7 items to their collection

3 weeks, 5 days ago
The Cinephile added 12 items to The Cinephile's Film Journal: 2019 list

3 months, 1 week ago
The Cinephile added 6 items to their collection

3 months, 1 week ago
The Cinephile added 6 items to their collection

5 months, 1 week ago
The Cinephile added 10 items to The Cinephile's Film Journal: 2019 list

5 months, 1 week ago
The Cinephile added 1 item to The Cinephile's Film Journal: 2019 list

12 months ago
The Cinephile added 1 item to Directed By: Antoine Fuqua list

1 year ago
The Cinephile rated Glass

Glass 5/10
1 year ago
The Cinephile added 2 items to Directed By: Steven Soderbergh list

1 year ago
The Cinephile posted a image

Watched on 10.23.18 1st Viewing Xbox On Demand
1 year ago
The Cinephile added 7 items to their collection

I know deep down I adhere to this quote, it's just tough sometimes to abide by. Either way, it remains a very powerful quote from a fantastic movie.

A Quick Summary: I enjoy all films, including the occasional CGI- fest, but hardly ever watch them. My current favorite genres are anything from back in the day, modern day thrillers and action films, and pretty much anything else. I consider myself a film buff, but still have a lot of work to do. Cinema is my number one passion, and that's mainly what I'm thinking about, or participating in more often than not. I try widening my array of the stuff I do watch, for that is the way to really become educated in this art form. I watch films for many reasons, including escapism, entertainment, to analyze them, for the actors, the acting, and because I just flat-out love to, and take them very seriously as an art form. My ratings are mainly very strict, as a film must impress me to a relatively large extent for it to receive even a 4/5 (8/10) star rating. I also have a different criteria for each genre, as each of them are ultimately aiming at different elements. That's why certain "WTF?" films will be given a relatively high rating from me. Most are guilty pleasures, or just underrated in my opinion.
I hope you enjoy yourself on Listal, as it's truly a great site. Also, NO SPAM FRIEND REQUESTS, it's become quite a nuisance. One more thing: If you rate 80 or 90 percent of your films 5 stars or a half star, please don't expect me to add you or accept your request, :)

How I rate films: (Differs between genres)

- A DISASTER in every possible way.

- An UTTERLY ATROCIOUS "Film" with no redeeming qualities. Except for maybe incidental humor.

- A BAD film, not really much different from a 1 star rating. Maybe a couple alright moments.

- Still a PRETTY BAD movie, just with one or two more positive aspects.

- MEH, not very worthwhile. The majority of these pass the time, but hardly do anything for me. I was most likely VERY disappointed, depending on the genre. Or, I enjoyed it, but not nearly enough.

- DECENT/SOLID, worthwhile for the most part, and actually pretty good. I may or may not see it again.

- A GOOD/DAMN GOOD movie, depending on the flick itself. Worth owning and seeing again.

- A VERY Good movie, not far from being a great one, and it should be on my shelves sometime.

- A FANTASTIC motion picture, and almost a guaranteed spot on my 'favorite movies' list.

- A MASTERPIECE pure and simple. One of the best films ever made. The rarest of the rare. Only 28 films on my list have this honor.

How I rate television shows:
Why this in addition to how I judge films? Television is on a whole different spectrum for me. I'm harder on them for some reason or another.

- One of the worst shows ever made. A rare sight.

- Still not worth any of your time. Just horrid.

- It remains a borderline bad television show. Not worth anything.

- Not so bad, it could be watched again, but chances are slim.

- Very much worth my time. Not a favorite, but still good.

- An extremely good show, sometimes great, and possibly one of my favorites.

- One of the greatest shows ever made, and a definitive favorite of mine. Another rare sight.

Note: Movies marked as "Watched" with no rating means I need more time to properly dictate a score. I need to mull it over for awhile. Or, in rare cases, I don't remember everything from it.

Movies: I collect Dvd's and Blu-ray's whenever I can. A.K.A when I have money to spend on them. I'm trying to build my collection the best I can.

Video Games: I have a wide array of video games, ranging from the Nintendo 64, to the original X-box and the X-box 360. As for the computer, I only occasionally play certain games. I don't collect very many games nowadays, but will acquire them when needed.

Music: I NEVER buy music, just listen to it pretty often, and am not by any means a fanatic. I am just your normal every day music listener, not something I'm passionate about.

Note: I have a lot of reviews from awhile ago that I have not yet revised or deleted, and they obviously aren't very good. Just please pay attention to the more recent ones. The old reviews in which will be changed will have an asterisk* in the title.

PvtCaboose91
Posted: 3 weeks, 5 days ago at Feb 1 17:10
My man!
We premiered Unleashing the Demons in July 2019. We immediately got distribution interest, and signed a contract with a North American distributor. In the interim, we did additional photography, reshoots, re-editing, got a whole new score commissioned, and now I'm just doing the final tweaks with the sound designer as well as final ADR.

It's 86 minutes long. The premiere print was 83 minutes. I'd estimate the recent additional shooting/reshoots accounts for about 35% of the movie.

When it's delivered to the distributor, I will let you know. All I know for sure is that it'll be available to rent & buy on Amazon Prime. DVD is also a lock. I'm trying to negotiate a Blu-ray, because that's bare minimum for me ;)

johanlefourbe
Posted: 9 months, 2 weeks ago at May 15 7:45
At last, I'm finally done with this list and this year, there is a big surprise with this end-result!
If you are interested and you want to check it out, you can use the following link :
Listal's 100 Films To See Before You Die (2019)

If you want, you can double-check the end-result : www.listal.com/list/listals-100-films-see-before-6391

We're taking more time to shoot more material, beef it up to around 70 mins. My first film to exceed an hour. Exciting times!!

PvtCaboose91
Posted: 1 year, 6 months ago at Aug 18 16:58
Just letting you know that the sequel to Inviting the Demons is my next project. And we've already wrapped (for now). It came together reasonably quickly (scripting started in earnest back in Feb, a treatment was written 12 months prior) and it's shaping up well. It'll be another feature, around 40 mins. I'll keep you posted!

If you are interested and you want to check the end-result, you can use the following link :
Listal's 100 Films To See Before You Die (2017)

PvtCaboose91
Posted: 3 years, 4 months ago at Oct 12 1:07
Thank you so much for your comments, mate! I actually met Ashley whilst looking for an actress for Betrayals & Bullets last year, but scheduling didn't work out for her. And now we're roommates.

As for my composer, I found his Soundcloud randomly back in 2014 and bookmarked it, thinking I should recruit him at some point. I messaged him a couple weeks before filming to ask if I could use some of his stuff, and he said he'd compose a full original score. And now we're really good mates.

Also, I got the inspiration for Nightfall mostly from Nicolas Winding Refn :D

Hope all is good with you, dude!

Two features in two years was not easy. I won't be pursuing a big project again for a while, most likely. But we'll see! 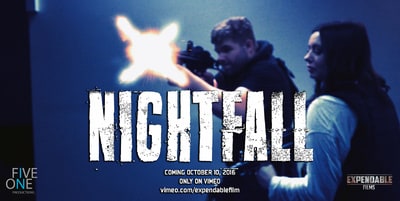 Why did it take so long?
I wanted to conduct additional photography in June, I recruited a third-party colorist who took a while, the composer has written a full original soundtrack, and I wanted to take the time to do it right. Yeah that covers it.

Georgini
Posted: 3 years, 6 months ago at Aug 21 5:22
Thanks for the vote on My Favourite Rockstar Games characters list!

BAMF
Posted: 3 years, 6 months ago at Aug 13 16:51
In reference to Goodfellas. Yeah I did some reviews I either make notes or type as I watch. Sometimes I feel it was more fun to write that way.

PvtCaboose91
Posted: 3 years, 9 months ago at May 20 10:27
Tonnes of Nightfall stills on the Listal page!
www.listal.com/movie/nightfall-2016

johanlefourbe
Posted: 4 years ago at Feb 2 16:31
Yes, it is once again time for our yearly tradition. What is the best movie, according to you, Listal member? What are you waiting for?!? VOTE!!!!

PvtCaboose91
Posted: 4 years, 4 months ago at Oct 30 9:24
Awesome, mate :)
The blooper reel is also available to view, I recommend you give that a watch. Full of laughs.

It wasn't an easy journey but it was a memorable one. Currently hard at work on the DVD & Blu-ray release.

OH, before I forget, the cinematographer on the movie was none other than Listal user Spunkeroo. He lives in Melbourne and we're pretty tight, so I flew him up for ten days for principal photography. Pretty cool, hey.